Lions and tigers and bears, oh my! I couldn’t help but think about that little phrase when reading about my upcoming adventure to Khao Yai National Park. According to the literature, the phrase should be changed to, “monkeys and tigers and elephants…oh shit!”

Okay, I added that last part, but only because there were several moments on this weekend trip that my friend Kati and I actually muttered those words.

It all started after a six-hour bus ride from Surin to Phimai, the town closest to the park’s entrance from Nakhon Ratchasima (Korat, as the Thais call it). At 2AM the bus driver woke us to say it was our stop. We stepped off and watched the bus drive into the night before noticing he had just left us standing quite literally in the middle of nothing. After rubbing the sleep from our eyes, we looked around in silence before our situation finally sunk in.

Behind us was a dark security office. We approached, knocked on the window and awoke a sleeping guard. He came to and tried to understand what two foreigners could possibly want as such an odd hour, in a place that could not have been a routine bus stop.

“Hotel,” I said, pointing in my way of asking, “which direction should we walk?”

He looked at me blankly, said nothing and turned around to leave. A few moments later, he returned with another guard he had seemingly waken from a deep slumber, and before we knew it Kati and are were separated and on the back of speeding motorbikes, headed for what we hoped was an inexpensive place to sleep for a few hours.

My bike was in the lead, and I couldn’t see Kati behind me. I began to worry where this man was taking me. Even if he didn’t understand my words, the backpack hanging from my shoulders was a clear sign of what I wanted. I knew it could have been a mistake to get on his bike, but the only other option appeared to be sleeping in the vast ditch separating the four lanes of highway.

When thoughts of the ill intentions this man might possibly have consumed me, the 15-minute ride became an hour. Finally, we arrived. And it appeared that my Thai had come across a little too clear.

In my drowsy state, the word for “cheap” escaped my memory, and instead I muttered, “mai pang,” which literally translates to “no expensive.” And he certainly understood.

So for 200 Baht, we got exactly what you might expect of a $6, double-occupant hostel with private bath…er…squat toilet. It was disgusting, but at least we didn’t see any cockroaches like in my room in Pattaya (repeat: don’t go). Therefore, I have to place it a notch higher than my worst hotel experience, but it’s still on the list.

Nevertheless, we managed to sleep without touching anything unnecessarily, and in the morning we opted to forgo showering in the grimy room that looked as though it would actually make us dirtier. We set out in search of the monkeys, tigers and elephants that brought us here in the first place.

Our bus dropped us at the park entrance, and again we realized how useful it could have been if we had researched this last-minute excursion, at least a little. Turns out, the information center is located 14 kilometers inside the park, and there are no buses, taxis, tuk tuks, etc. that can take one to it. Our options, said the entrance-fee attendant, were to hitchhike, or to rent her personal motorbike.

We paid the woman 600 Baht for a one-day rental that would cost 200 Baht anywhere else in Thailand, and promised to have it back by 6PM, when she was to finish work.

One of the first signs we passed read: BEWARE ELEPHANT CROSSING. Naturally, we were stoked.

“You’re on elephant watch,” I told Kati as I drove the bike through winding roads. “We can’t leave the park without seeing one.”

Cruising along the highway (I should probably mention that the park is huge. It covers the corners of four provinces.), monkeys crossed our path and we saw elephant dung on the shoulder. The odds appeared to be in our favor. 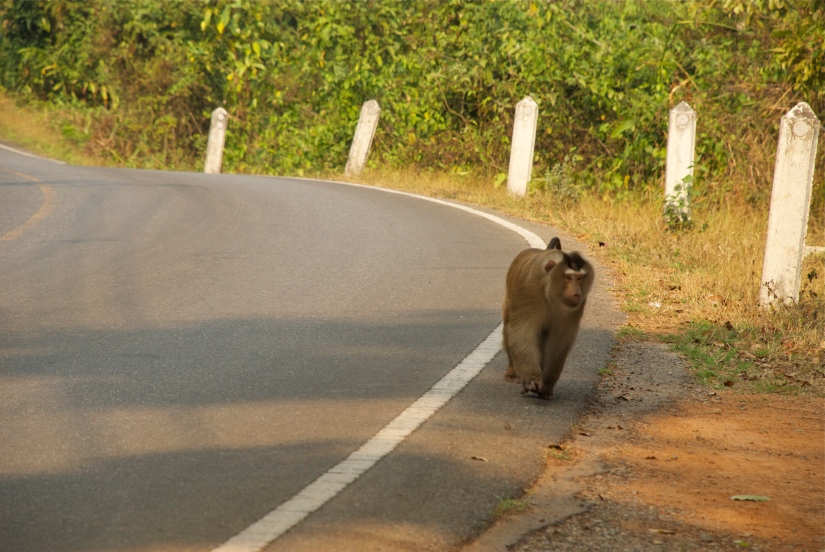 We gathered maps from the information office and, for time sake, made a quick plan to aim for the two waterfalls we wanted to see and hoped to witness amazing things along the way.

After the first and largest waterfall, we got back on the bike and noticed the fuel gauge read empty.

“How far for petrol?” we asked a guy in the souvenir shop who spoke English.

“Far from here. About 20 kilometers,” he said. “You must exit the park on the other side and find a gas station a few kilometers outside.”

But we made it. Barely. And then we were on our way to waterfall Number Two. 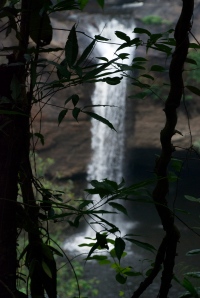 Monkeys stopped us in our path, and a few deer grazed happily, both good reasons to stop and get some feeling back in our bottom halves after being on a bike for most of a day. We searched hard for an elephant at each dung siting, using up every minute of the time we had that bike, but alas, the only elephants we saw were statues. 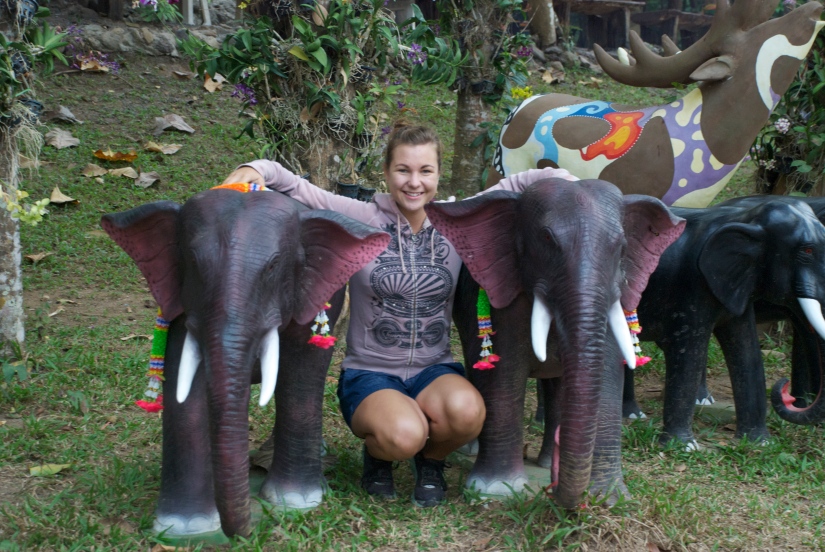 Eventually, 6PM approached and we had to leave the park without so much as seeing a buffalo. We returned the bike to the kind lady who informed us that the last bus back to Phimai had left at 5PM.

“You can hitchhike,” she offered. So that’s what we did.

A nice man driving home from Bangkok in a fancy new car picked us up, entertained us with conversation about his job at Toyota, and then dropped us at the bus station. He refused to take payment, claiming he wanted to do it and he was already going that way.

Lonely Planet said one would be truly lucky to see a tiger in Khao Yai Park, and I guess that luck wasn’t on our side. But, when it comes to the adventure that was getting to and from one of Thailand’s natural wonders, I’d say it certainly was.